Based on analysing the text of Night Fall: (Nighthawk Security Book 1), we estimate that readers of 10th and 11th grade will be able to read this book. This estimation is based on a number of readability tests devised by experts, some of which is listed here. 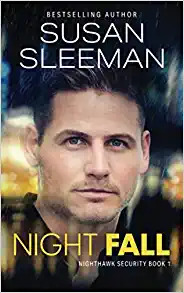 She faces dangerous situations all the time…
Olympic downhill skier, Harper Young, knows what it’s like to look danger in the face. After all, she does it every time she races down a ski slope. She’s fine with that danger and even excels under the pressure, winning Olympic gold. And as a governor’s daughter, she’s familiar with receiving threats from the general public. But when a stalker turns his sights on Harper, she possesses zero skills to protect herself.

But she has no idea what lurks in the shadows.

Former Navy SEAL and ATF Agent, Aiden Byrd of Nighthawk Security is well versed in protection skills and knows the dangers she faces. Problem is, there’s an instant attraction between Aiden and Harper, and Aiden has to fight hard to remain professional. As the stalker grows bolder and tries to end Harper’s life, Aiden’s only hope in keeping her safe is to deny his feelings. Something that borders on impossible.