Songs of a War Boy

Based on analysing the text of Songs of a War Boy, we estimate that readers of 13th and 14th grade will be able to read this book. This estimation is based on a number of readability tests devised by experts, some of which is listed here. 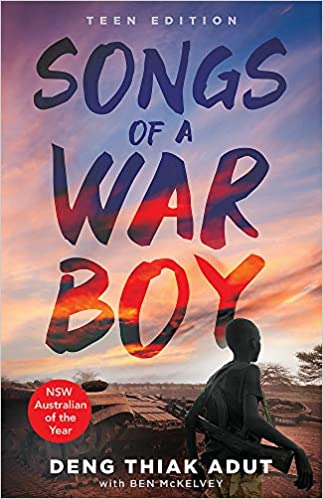 'A reminder that every childhood is different, and some are jaw-droppingly, mind-bendingly, heart-wrenchingly different.' - Morris Gleitzman, Australian Children's Laureate

Deng Adut was six years old when war came to his village in South Sudan. Taken from his mother, he was conscripted into the Sudanese People's Liberation Army. He was taught to use an AK-47 and sent into battle.

Shot in the back, plagued by illness and the relentless brutality of war, Deng's future was bleak. A child soldier must kill or be killed. But, after five years, he was rescued by his brother John and, miraculously, they became the third Sudanese family resettled in Australia.

Songs of a War Boy is the inspirational memoir of a young man who has overcome unthinkable adversity to become a lawyer, refugee advocate and NSW Australian of the Year. It is also an important reminder of the power of compassion.

Content warning: Parts of this book contain confronting material that might cause distress to some readers. For ages 12+