Based on analysing the text of Tribulation: Kingdom of Darkness, Book 1, we estimate that readers of 11th and 12th grade will be able to read this book. This estimation is based on a number of readability tests devised by experts, some of which is listed here. 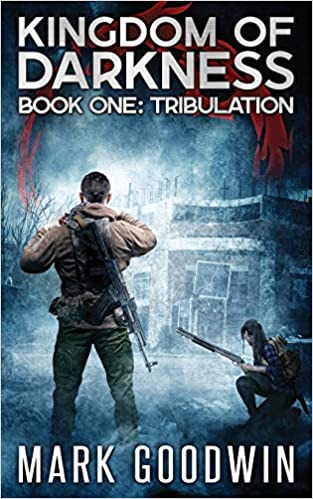 And the kings of the earth, and the great men, and the rich men, and the chief captains, and the mighty men, and every bondman, and every free man, hid themselves in the dens and in the rocks of the mountains; and said to the mountains and rocks, “Fall on us, and hide us from the face of him that sitteth on the throne, and from the wrath of the Lamb: for the great day of his wrath is come; and who shall be able to stand?” Revelation 6:15-17

Accused of domestic terrorism, Emilio Vega was on his way to a Department of Global Security death camp when the mega-quake hit. The streets beneath his transport vehicle buckled, tossing the van in the air like a toy. He survived the crash, but the world is now in ruins. However, for a condemned man, this disaster may be just the lucky break he needed.

Emilio has been left behind!

Six detainees were in the van prior to the quake. However, only Emilio and one other prisoner were still around when he regained consciousness. Emilio searched the surrounding area, but to no avail. The missing prisoners believed in an event called the rapture, when Jesus would collect His saints before raining down unbearable wrath on the planet’s remaining inhabitants.

Can Emilio and Mackenzie survive the gauntlet of destruction known as the Great Tribulation?

Mackenzie Thompson, the other prisoner still present, is convinced that it was the rapture and that they’ve been left behind. She also believes a time of unparalleled torment is about to be poured out upon the earth. Emilio and Mackenzie have a place to go, but it is hundreds of miles away. The roads are unusable, and the two of them are fugitives on the run. If this truly is the Great Tribulation, it’s off to a bad start.

Don’t miss this exciting new end-times thriller. Get your copy of Tribulation today!

As with all works by Mark Goodwin, this book contains no profanity and no embarrassing sex scenes. However, if you are offended by conservative principles and references to Scripture, this book might not be for you.